Having a disheartening week in the garden. Things are growing great, and then overnight – gone! 3 beautiful rows of Chantenay carrots, reduced to just 3 carrots. My broad beans are covered in black fly. Slugs are decimating the cauliflowers, and something, maybe mice, are digging out bean and pea seeds before they can germinate, or just nipping off the tops of shoots at soil level. So far the veg patch has yielded one perfect radish, and 3 slug maimed ones. This is not easy…. I’ve added beer traps to the polytunnel (finally using up that bottle of coffee flavoured porter, that was never going to be drunk unless very very desperate), which has helped, I’ve caught loads. Good old pinterest said peppermint oil would deter mice, so I’ve added drops to cotton wool and tucked them around the pots that were getting monstered. All that seems to have done is reduce a hot polytunnel to a cloying Colgate scented hellhole that’s making me gag. Meanwhile the mice (possibly in breathing apparatus, it’s too early to confirm) are still knocking up a wee salad, the likes of which would be £28 in some pretentious cak hole in Notting Hill. Organic don’t you know!

Jesus H Christ. What’s a lass to do.

I’ve sown more carrots, I’ve moved the coriander, beetroot and cucumbers into the living room. Eat them in there you little bastards – ha! Plus sown even more sodding peas and broad beans and brought them inside too. I’ve covered my perfect row of little gem lettuce with a clear plastic box to try and stop them being nommed. I made rhubarb leaf aphid spray and liberally sprayed the broad bean plants which are thick with what looks like black eggs. Fingers crossed!!

Some things are growing well, tomatoes, peppers, rhubarb, runner beans, onions, garlic, and strawberries, but every day I go to check everything I hold my breath, half expecting vegmagedden.

As for what else is going on, finished weeding out front, and moved all my sunflowers to outside the perimeter fence, to sit between the troughs I’ve planted with wildflowers from the seeds Craig brought me back from Greece. Should look pretty when everything starts to flower. I’ve moved the boards I’d used to cordon off the roof tile danger area, the dogs were jumping over it anyway and we know not to sit under there. Still waiting for a devis to get it fixed from the roofing company down the road. At least everywhere looks a bit more tidy out front.

I chopped down a load of brambles that was surrounding the lean to wood store, and removed the out of control sapling and brambles that was scaling the house between the two rear cellar doors. Haven’t done all of it as one area has the brambles mixed in with a grape vine which I’m trying not to destroy, so slow progress there. But hey, 2 more massive piles of garden waste yaay! 😬

3/4 of the office is now filled, bit more filling to do tomorrow, then it’s, sand, wash down, and get some paint on the walls. Cannot wait to Farrow & Ball the bejeezus out of that fireplace.

Other than that, Friday night, on my lonesome, sat outside on the bench with my flatulent Bulldog, and a swallow that sounds like R2D2 for company overhead. Hot chocolate in hand and nowhere else I’d rather be. I bent down to pick up Shelly, he’s a bit of a chunker (one of is nicknames is Jean-Claude Chunker) I felt stabbing acute chest pain. That’s it, I thought, death is coming fleet of foot, heart attack, angina (I’m 43, I’m now convinced every minor twinge is something dastardly) but lo, the dagger to the bosom was no more than a wayward bra underwire. Another one bites the dust, but at least no need for an ambulance…… 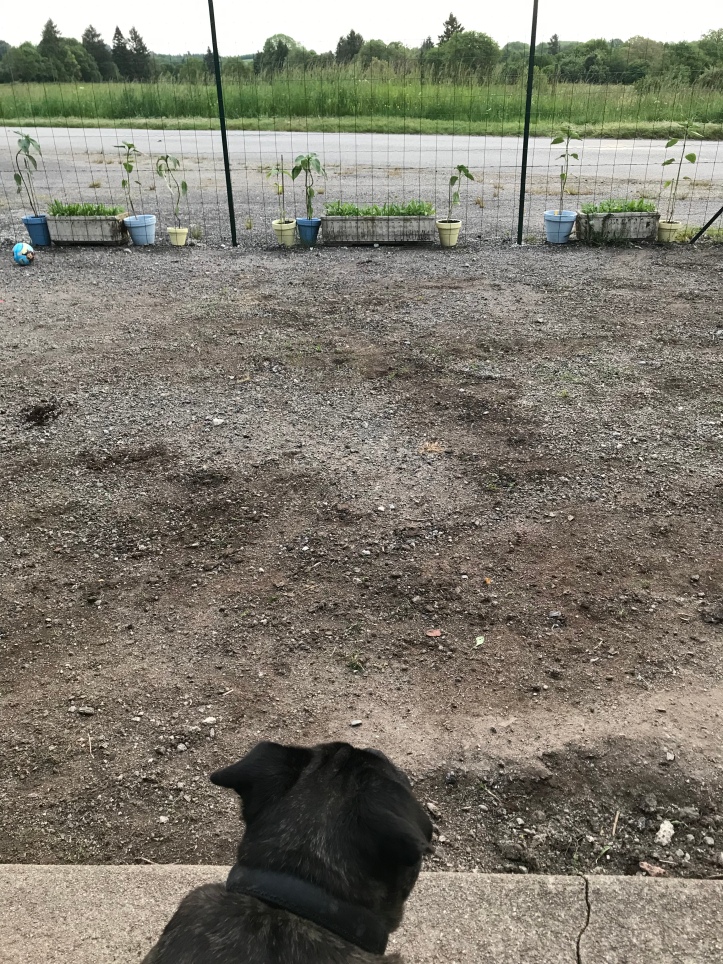 But, for those of you that think I’m on perpetual holiday, my day began at 7.00am today (after being woken at 2.00 by puking dog….) and ended just after 9.00pm and it’s flipping hard physical work. Now the weather is alternating heat and rain, you have to put in the hours just to maintain what you’ve achieved thus far, and stop nature reclaiming it, not to even gain any ground.

Don’t get me wrong, I am absolutely not moaning, but it’s not all sitting in the hammock with a glass of Pino you know. I seriously don’t know why I’m not a size 10.

(At time of going to press, weight loss 6lbs since last Sunday – telling you in the vague hopes I can keep it up 😇).