Deary me, I think I must look psychotic about now. As if several days of daytime British Summer temperatures – but at night, weren’t enough, la Canicule is having a bit of a sting in its tail.

I don’t even know how long I’ve been awake now, but I remember the storm starting just as I was settling down to sleep at about midnight. It was distant and quietish then, but the lightning was so bright, especially as I had our French style windows that open inwards, with the curtains attached to the frames, as wide as they could go, due to the heat.

I had some fitful sleep, but as it rolled around and came gradually closer the thunder would wake me every 5-10 minutes, before ebbing away again. This ebb and flow continued for most of the night, until the rain came. All the rain. Like ball bearings were being thrown at the roof by a petulant Zeus at the pique of his temper. I realised then that we were in for it.

It was close, the thunder was shaking the window frames, the lightening faster and brighter. There was no delay between thunder and blinding flash any more. I thought it would pass quickly because of the intensity. It didn’t. Freya had had enough and ran into the living room. I coaxed her back and reassured her. We’re fortunate that the dogs are pretty good with loud noises, but even I was getting concerned, with an orchard and a barn, and little rain for several days, and being here alone with no car (it’s at Limoges airport awaiting Craig’s return). I thought, do I even know how to call the Pompiers. That’s a resounding no, and perhaps I should really stop ripping the piss out of their annual misery calendar of car accidents and barn fires……

The lightening was spectacular though, so I took some video to show Craig, and accidentally filmed the moment the lightening hit something extremely close (when it’s daylight, I’d better go and see what it was) and made the most horrendous ungodly noise. The video doesn’t do it justice, but it was like a hole being ripped in the space time continuum. I stopped the video and my hands were shaking. Enough now, I thought, I’m getting dressed, this is getting silly. Fumbling for the switch on the bedside lamp, I then realised that the fan wasn’t working, and that horrendous noise had taken out the power. Shit.

This is where having anxiety wins because guess who knows exactly where her Maglight torch is at all times? This chick! For some reason, my shaky hands probably, I couldn’t seem to operate the torch on my phone at that moment. Torch in hand, I lit candles, and reassured the dogs in the living room. I was going to have to go next door to the big house cellar, and hope and pray it was just a tripped fuse. The rain was coming down like crazy, and I didn’t even want to go outside in the lightening, but I waited for a flash, and then ran next door. I have never been so glad to see the outside lights come on in my life. The power was still on in the big house thank god! I checked in all the rooms, and unplugged all of Craig’s computer gear as a precautionary measure, the storm was still in full flow. I went down into the cellar and the master fuse for the gite was tripped. I reset it, checked the freezer was still running, all fine, then the same terrifying sprint between lightening strikes back to the gite. Lights on, fans running, very strong cup of Twinings in hand.

Of course, torrential rain after a prolonged dry spell means only one thing, stinky fosse, after its been grumble free for months. Hoping it’ll pass in relatively short order.

My poor little doggies are exhausted, both in a coma now. All the things I’d planned to do today will need a bit of a reshuffle. Then you also realise that you’ve left the thick heavy bathmat outside all night because it wasn’t quite dry….. sigh…..

Dawn is breaking now, but still rumbling in the distance. I’ll wait a bit before taking the dogs out, but I think it’s passed.

P.S. Just been for a wander round the back and everything looks in order, so phew!

Video, for reasons known only to WordPress, will not upload, but you can watch it on my Facebook or Instagram page at Rosbifblog. 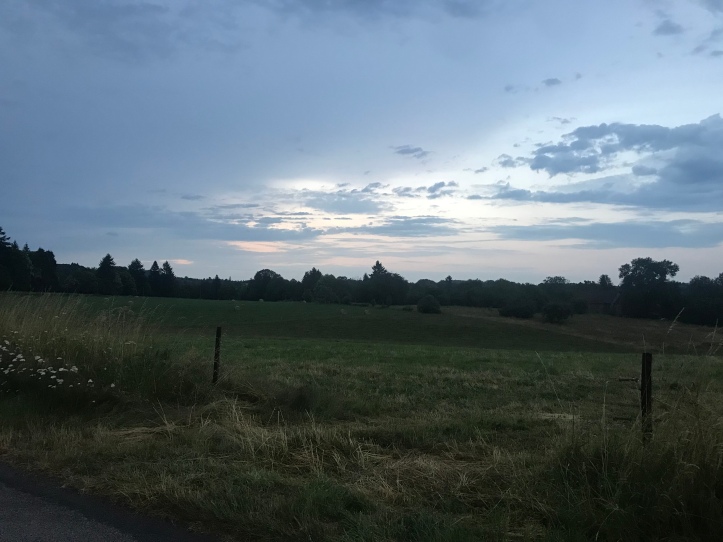